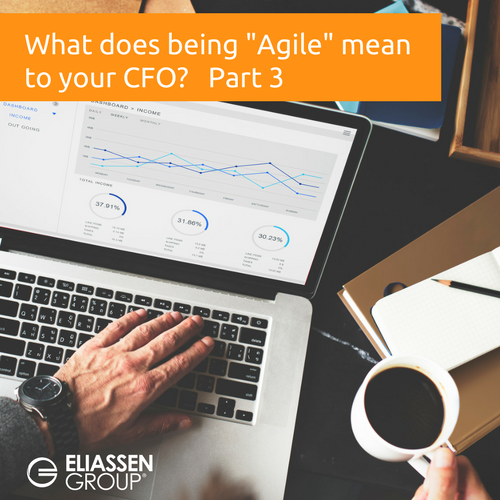 What does being "Agile" mean to your CFO? Part 3

The Business Case for Business Agility

Cliché or Real? The world is changing around us at a faster and faster pace. Companies we hadn't even heard of a decade ago have become the centerpiece of our daily lives. The decadent luxury of one generation has become the standard of the next. Consumers and businesses alike now favor pay-per-use and “try before you buy” options. Information and services of yesteryear are now available on our Smartphones for the cost of just a few clicks or the “ad-free version” for a few dollars a month.

Infrastructure Enablement: As reported by CNBC in February, Amazon Web Services, or AWS, sells "virtual" compute services, competing directly with "physical" or data center compute services. AWS, started in 2006, is now at a revenue run rate of $20B, with 40%+ growth. What’s more, 60% of Amazon’s margins come from AWS.1 These numbers indicate an enviable growth when compared with the single-digit growth of physical infrastructure counterparts.

Capex to Opex: Virtual compute resources are typically rented and billed monthly, converting what were previously large-capital projects to pay-as-you-grow.  From an accounting perspective, this converts capex to opex and frees up precious working capital and infinite elasticity in direct response to demand... the dream of every CFO.

The Lean Startup Movement: Eric Reis has led the "Lean Startup" revolution in which companies quickly test business plan assumptions before going all-in.2 In order to test new markets, we need flexible, fast-to-market infrastructure and flexible customer experience enablement. One example of this concept is Inuit’s Turbo Tax product, which moved from one annual box release just before tax season to a model in which the company conducts hundreds of experiments and implements improvements on a daily basis during the few weeks of peak tax-filing season.

Enablement of Strategic Execution:  Pay-as-you-go compute infrastructure assists in the significant hurdles of fast and frequent testing of business case assumptions. Similarly, elastic infrastructure enables the rapid growth or instantaneous tear down, which removes significant risk involved in business formation. The only challenge remaining is to deliver frequent, high-value, customer-quality software on a short and sustainable cadence. Some will say this is "Agile," but for true business Agility, in addition to Agile delivery teams, a company also needs the right Agile features (Business Agility) and fully-automated integration testing and deployment (DevOps) to release customer-quality code frequently.

Business Agility:  Business Agility depends on a backlog of well-refined, highest-priority, smallest-viable features ready for teams to pull. The next-available team pulls and delivers that feature in faster calendar time than ever, as impediments are continually removed, and code is checked multiple times daily and is automatically run through integration tests. New features are released toggled-off, usage is simple, and training is intuitive and implemented in response to customer need. Adoption is monitored, usage patterns collected, demonstrated value is measured, and the features are tweaked based on customer feedback before delivery.

Functional Management: Traditional management built specialized teams to be functionally efficient and incentivized individuals to be experts in their specific area. Managers became experts of knowing who could do the work and assigned work most efficiently. In many cases, managers were experts at doing the work and were respected based on their own technical expertise. The Dan Pink intrinsic motivator of "mastery" of the managers is challenged as Agile encourages the team to self-organize based on how work is to be accomplished. The Agile functional manager develops his or her team instead of managing the work. Agile questions all these legacy values of culture, often built upon decades of corporate success. Agile utilizes “end-to-end” delivery of the highest value with the shortest sustainable cadence. Team members help each other across disciplines to "start finishing and stop starting" the work. It is a challenge for traditional culture to adopt these values.

Expertise Disintermediation: Amazon and other cloud providers recognize the benefits of expensive virtual services and have continued to invest in the disintermediation of commonly-used development skill sets. Shortly after data and server infrastructure services were made available, database, logging, and replication services quickly followed. Over time, the cloud providers have made services that developers need increasingly available, including search services, language translation, and more.

Takeaways? Fundamental economic forces cannot be changed. The traditional industry must recognize the real threat of disintermediation. As a society, we see it in our everyday activities. These forces cannot be ignored, as they will affect all industries. Industries will continually transform as the customer experience continues to be improved at lower costs.  My recommendation? Invest in smallest-highest value strategic capabilities and features, invest in Dev Ops, invest in elastic infrastructure, and invest in the fungible team. Invest in the strategic capability to adapt to your business environment quickly, responsibly, and most importantly, before your new-world competition does the same. Adapt and evolve, or become extinct.

Click here to Learn how to put Business Agility to work in your company!