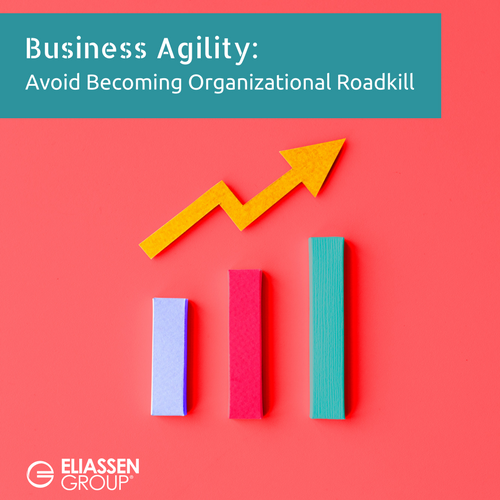 The Need for Business Agility

A shortcoming of most Agile transformations is that they do not go far enough when implementing Agile within an organization. They tend to solely focus on the IT side of the organizational equation without addressing the business side of the equation. IT transformations allow organizations to become more efficient and effective at delivery value once that value has been defined. Once something has entered the organization’s internal system, it can then be processed quickly. A colleague of mine refers to this form of optimization as ‘internal optimization.’

However, the ability for an organization to continually identify potential market opportunities or threats, validate them, rationalize, and prioritize them for execution is left untouched. We might refer to this as ‘external optimization.’

The focus on internal optimization without also improving external optimization is the equivalent of a predator that can effectively process food once it has been captured but has not developed its ability to see, hear, and smell in order to effectively hunt. Ultimately it either starves to death or is eaten. This sounds rather harsh but the cold reality of the modern day business climate shows us time and again organizations that once ruled the roost that later became a footnote in history since they could not adapt quickly enough. Think Blockbuster vs. Netflix, Blackberry vs. Apple, Borders vs. Amazon and the list goes on.

Agile has grown beyond its software development roots as more and more organizations are realizing that in order to remain relevant in an ever-increasing competitive environment, they must embrace Agility throughout their entire organization. This means more than the adoption of Agile and DevOps within IT. It means an organization must develop the muscle to define a clear and shared strategy, continually assess its environment for changes, identify possible responses to those changes, rapidly test and learn which responses are the most viable, and then effectively execute change to generate value to its customers. Furthermore, an organization must engrain in its cultural DNA the ability to not change once but to continually change to become a complex, adaptive system.

There are several books on the topic of Business Agility of varying degrees of value. Two of my favorite are: The Agility Factor1 by Christopher G. Worley, Thomas Williams and Edward E. Lawler III and XLR82 by John Kotter.

In his book XLR8, John Kotter uses the term the ‘dual operating system’ to describe an Agile business. It is an organization that has a traditional hierarchy to allow it to execute efficiently in the world of the known and a flat, network-structured organization that allows it to innovate and respond to change. Kotter stated the following in a Forbes interview with George Bradt:

“Management-driven hierarchies are the way we run organizations. They deliver reliability and efficiency and reduce risk.” But, “There is no way to get revolutionary innovation if the system is focused on reducing risk.” The traditional system has to be well managed with clear jobs and, yes, silos to focus efforts. Conversely, “Revolutionary innovation comes about when information from a variety of places that don’t normally collide do collide and a light bulb goes off.” It’s all about creating connection points.3

In their book The Agility Factor, Worley, Williams and Lawler dig deeper in their analysis of what makes a business Agile. They studied the financial performance of 243 large firms in 17 industries over a 30 year period from 1979 to 2009 to find a link between Agility and consistent high performance. They used return on assets (ROA) as the performance measurement since it is a meaningful proxy for profitability and management effectiveness.

Of the companies they surveyed, there were only 2 to 3 in each industry that were ‘outperformers’ in that they beat their industry average 80% of the time. The authors then surveyed 4,700 directors and executives about strategy formulation, organizational structure and process, leadership, change management, and innovation4. They looked at what each of the outperforming companies had in common and identified four essential routines that are at the core of an Agile business. They defined these as ‘Agility Routines’ consisting of the following:

Strategizing dynamically – This describes an organization’s ability to create a clear, relevant, and shared strategy. They instill a shared sense of purpose within their organization that has a positive identity and differentiates it from its competitors.

Perceiving environmental change - This is an organization’s ability to continually monitor its environment for change. Employees are put in direct contact with customers, regulators and stakeholders. Their perceptions of the environment are communicated to decision makers for interpretation and response.

Testing responses - This describes an organization’s ability to run experiments on their responses to the perceived opportunity or threat through rapid test and learn cycles to accelerate learning. Failure is accepted as a means to learn.

Implementing change - This describes an organization’s ability to convert the learnings from their experiments into action that allow the organization to differentiate itself from its competitors.

The above routines create a culture in which the ability for continual change becomes an essential organizational capability to rapidly adapt. However, the Agility routines are not enough since efficient execution requires the implementation of sound management practices and the clear definition of capabilities that differentiate an organization from its competitors.

How do we get there from here?

It starts with the understanding that Agile isn’t just for IT. The Agile mindset must be embraced throughout the organization and especially among the C-suite. The next step is to learn more about what Business Agility is, how it can benefit your organization, and developing a plan to go beyond IT with your transformation.

A true transformation goes beyond just IT to encompass the entire business ecosystem. It embeds the capacity for continual change within the organization’s DNA allowing it to persevere or pivot on its business strategy. That strategy is built on sound business practices so that once the right direction is identified the organization as a whole can deliver greater value sooner to its customers allowing it to not only survive but thrive. Those organizations that are reluctant to embrace Agile across their entire organization are at risk of becoming organizational roadkill in the long, winding, and treacherous road of business.

Tom Wessel is an Agile Coach and Client Delivery Lead, working with various sized organizations in financial services, healthcare, home improvement, utilities and cable and satellite to plan, implement and train teams on agile principles and evolve their agile discipline.